King Gizzard and the Lizard Wizard continue to bend musical genres to their will and defy expectations with their latest release, L.W. Subtitled “Explorations into Microtonal Tuning, Volume 3,” L.W. is the Australian band’s seventeenth studio album. It is also a sister album to their November 2020 release, entitled K.G. Recorded in isolation at the band members’ home studios during the lockdown, L.W. was released February 26, 2021 on the group’s label and is available for sale on Bandcamp as a digital download.

The first track, “If Not Now, Then When,” begins with a rousing minute of saber-rattling and cymbals crashing, seemingly leading into a heavy metal opus. It takes an abrupt left turn into clavichord-driven 80’s funk, punctuated by a staccato falsetto. It’s very catchy, despite the minimal instrumentation. The guitar belatedly enters the song on the final note, leading into the second song “O.N.E.” without pause.

“O.N.E.” starts with pleasant bells and an airy chorale, elevated by pulsating timpani, fuzz guitars, electric piano, and steel drums that duet with the vocal melody. It has a flowing tribal rhythm, with instrumental callbacks to “Automation,” the second track on K.G. It fades into a hypnotic polyrhythm that seems to end too soon. 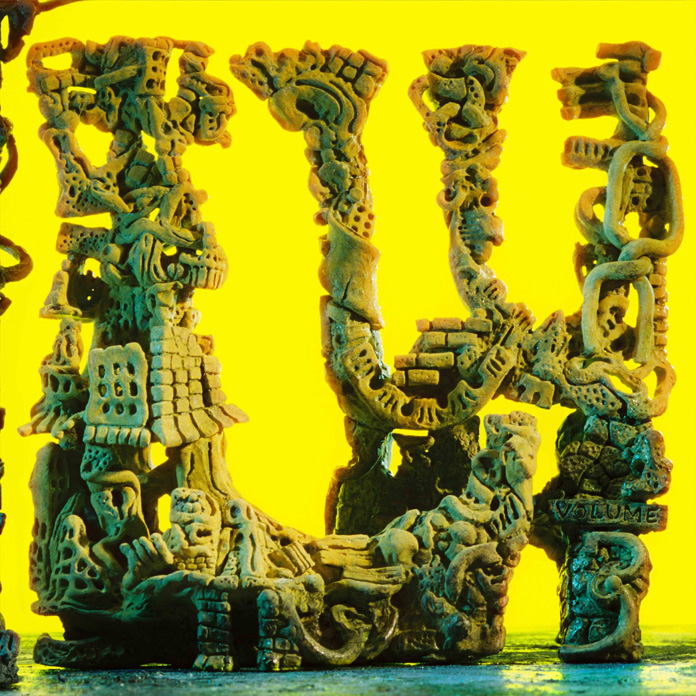 “Pleura” opens with Middle Eastern-tinged sounds of an oud or lute, which quickly surrender to grungy guitars and clashing time signatures. The enmity is palpable on this first banger of the album, with familiar gripes of an “orange baby always squealing.” The chorus provides a sharp yin & yang contrast, from the subdued mysticism of lute and flute orchestration to the proclamation “one more piece of Jenga to fall, then the necromancer will thank us all.” The song’s two distinct styles briefly come crashing together in a psychedelic rave-up, fading into a dreamlike a capella until the inevitable rude awakening and crescendo.

“Supreme Ascendancy” teases the listener with the innocent pairing of piano harpsichord and steel drum. The rhythm section and melody join in 5/8 time, backed by new wave instrumentation. The angsty lyrics are critical of the Vatican, punctuated by the song’s odd time signature.

The group’s Eastern influences are again evident in “Static Electricity,” a fluid tune seemingly written in an Egyptian bazaar. The oud is prominently featured alongside the yearning melody. It is well-accompanied by ambient synthesizers, with aural psychedelia and an infectious beat that wildly intensifies.

It flows appropriately enough into “East-West Link,” transporting the listener on an Eastern road trip. While evocative of Istanbul and the Bosphorus bridge between civilizations, the lyrics actually refer to a controversial proposed bridge in Melbourne, Australia, where the band resides.

The group’s predilections for odd time signatures and 15-beat measures return in the ethereal, futuristic “Ataraxia.” The jubilant chorus makes “Ataraxia” one of the catchiest songs on L.W. After a subdued instrumental interlude, it returns to launch the listener from the arcade into interstellar space.

Ominous xylophone and steel drums ring in “See Me,” paired with staccato vocals. Themes of solitude and desolation are evidenced by the song’s frustrated chorus: “How can anybody see me, I’m invisible.” The lyrics could reflect the isolation the band experienced while recording L.W. during the pandemic, or could be interpreted as a mantra for people who suffer from discrimination and strive to be “seen.”

The album concludes appropriately enough where its predecessor began, with the angular “K.G.L.W.” Contrasting its earlier inception on K.G. as a momentary desert soundscape, “K.G.L.W.” is transformed here into the lengthy “Sabbathified” metal anthem that was teased in the first minute of L.W. The foot-stomping, acid-drenched bridge takes the intensity to eleven in its final moments as the listener is swept along and surrounded by headbanging legions hypnotically reciting their initials in a glorious finale.

L.W. is an offbeat album that mashes together the band’s eclectic influences in unconventional ways. Progressive and metal flourishes add elements of theatrics to the demented progressions, fervent choruses, and genre-smashing instrumentation. It’s an impressive addition to King Gizzard and the Lizard Wizard’s expansive catalog. While L.W. stands well on its own, it becomes more definitive when paired together with K.G. as a conceptual snapshot of the group’s frenetic trajectory.

L.W. is available on the group’s Bandcamp page at this link:
https://kinggizzard.bandcamp.com/album/l-w