As I dove into the wondrous musical dreamland that is the Black Angels’ new album Wilderness of Mirrors, I steadied my fingers and mind for a journey of discovery. I am pleased to say it was far more than I could have asked for, and I’d love to tell you how I had the pleasure of writing about an Austin-based band that is, without a doubt, master of their craft.

“Without A Trace” starts with a tender lo-fi organ and a simultaneous track on top of a growing drum beat with a low pass filter. This type of creative dissonance feels similar to a Charles Ives’ composition, and next whisks you into a driving guitar fuzz line that sounds like a psychedelic didgeridoo. A big tribal call sounds and I’m already foaming at the mouth to hear the first lyric drop. Here it comes, “I adore your felony / I’ll tell you why / let’s go get some treasury / I want to fly /hiding our identity / don’t let them see /stinging like a honeybee / the king bee”. This first verse hits like a dose of dopamine, and the cilia in my ears stand on end in anticipation of the next melodic figure to arrive. The meaning of the song is aimed at the serious question of “haves” co-existing with “have nots”. If so, the song touts “we are invincible”. However, the song punctuates in the aftermath of

I had the pleasure of writing about an Austin-based band that is, without a doubt, master of their craft.

a delayed, and pulsing guitar solo echoing in the background on the final verses. Here the speaker says, “We need commanders / who don’t feed disaster”, passing the baton to a de-scaled drum, and guitar riff percussively trailing to the song’s end. Bold, yet coolly delivered, this first track sets the bar for the rest of the album.

“History of the Future” starts grunting and growling as the guitar beckons us to embark. As a huge fan of Rage Against the Machine and Tom Morello, I cling with excitement for any brash, tasty, flashy licks like this one. A soft contrast enters at the verse with minimal upper melodic tones swirling behind the vocal in the foreground. The poignant lyrics in this song are “And when he returns / he tells the village about her / a powerful girl / who changed the world forever.” The psych-rock vibe goes from heavy to colorful in a wave of surgical precision. My favorite imagery arises from the mention of crystalline prisms which can bend light, and are rumored to have the power of swaying human hearts. The breaks in the bridge move like 60’s rock, before the stacked vocals and full band bring us an addictive dance-positive outro that returns us to the groove that started it all. Rockers, you can hit replay. It’s worth it.

“Empires Falling” is cycling with tremolo tones that take you away into an entrancing drum groove. Christian Bland and Jake Garcia build a masterful soundscape with their guitar work in this one. The hypnotizing groove mirrors the sentiments of the lyrics, “Empires falling / it’s history on repeat”. I believe Alex Maas has created the effect with the looping hooks in this song he spoke about some years back when he wished to create something that sounded like Leonard Cohen meeting the Wu-Tang Clan. This is it! And the songwriting speaks directly on a broad and extremely relatable topic in human history. 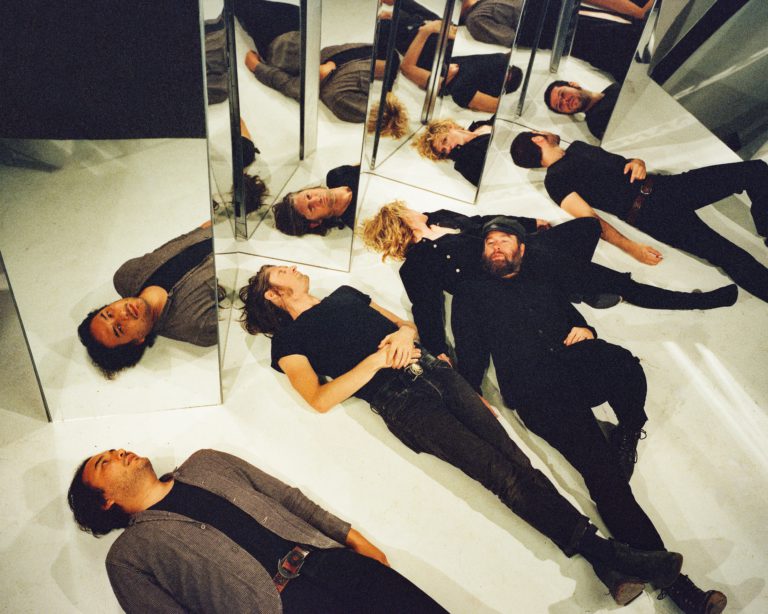 Make it a point to watch the fantastical music video that was released for “El Jardin”. It was brilliantly directed by Vanessa Pla and stars Lev Amelio and Austin Amelio. “El Jardin” magnifies the power of building and destroying life and beauty while personifying what feels like the earth’s voice. The cinematography in the video plays off the futuristic and dystopic with a charm & wonder that begets deep reflection. Brett Orrison has shown great consistency in the production of this album thus far and is even featured as a vocalist here. Dual guitar lines and interwoven lyrical phrases culminate at the perfect moments and lift this song to a new level of psychedelic euphoria.

The Westminster Quarters, a popular church bell tune, opens and resets your perspective in “La Pared”. Stephanie Bailey works percussion with nimble dexterity, with each riff and punctuation leaving you sublime. Quite often in this type of genre, the rhythm can be overlooked for the sake of creative chaos. The references to the Berlin wall in both 61’ and 89’ give a powerful quality to the lyrical play and the imagery of the overall message. My favorite part is definitely when the end of this piece haunts like a madrigal with the organ holding a pedal tone and two voices poking through singing, “You can build this wall of hate / but we’ll never separate”.

Though the song floats like a feather, it simultaneously engages your aural sensory facilities much like a drug.

Loulou Ghelichkhani makes an appearance in “Firefly” with French vocals during this rousing tumble down the sultry rabbit hole. The transport of scenery is well-crafted as we approach the album’s midpoint and take a left turn into a song-induced trip. This ringing temptress exists not just in the lyrics, but also in the thick motifs that the band skillfully executes. Though the song floats like a feather, it simultaneously engages your aural sensory facilities much like a drug. Before you know it, you’ve gone to and from a distant French absinthe cafe, or at least a visual mirage of one.

“Make It Known” is truly a fierce combination of eastern and western music blended together. The teeth come back out, with Jake Garcia’s driving guitar, and Ramiro Verdooren flexing his multi-instrumentalist chops on bass and gamelan piano. If you love the mellotron, this song champions plenty of it to suit your desires. Each track continues to get wildly diverse as we move forward to “The River”.

The Black Angels channel the spirits in “The River”, calling out to Syd Barrett, Roky Erickson, Arthur Lee, along with members of the Velvet Underground. This homage to the forebears of psych-rock, mixed with the dissonant changes and chime effects, is nothing short of a musical seance. The need for a massive nod of respect is not lost on the Black Angels who humbly honor, and acknowledge inspiration from those who came before.

With arguably the most experimental intro on the album, “Wilderness of Mirrors” starts with a turbulent mix of sounds and trumpets. When the hook kicks in, your mind settles into auditory homeostasis. The lyrics are a mere passenger in this hallucinatory submarine. My only criticism is that this ride ended too quickly. I feel like this could have lasted much longer, or perhaps that is what the Black Angels are aiming to do– leave me wanting more. How clever indeed!

If anything on this album can be considered a ballad, it is “Here and Now”. While listening to both the music and lyrics, you can’t help but experience a longing sensation deep inside. A montage of the imagery Maas creates in this tune sticks with you long after the song ends. Unlike many of the other songs on the album, this tranquil but passionate resonance makes me think back to the voice and tone of Maas’s 2020 solo release, Luca.

I feel like this could have lasted much longer, or perhaps that is what the Black Angels are aiming to do– leave me wanting more.

The title, “100 Flowers of Paracusia”, is brilliant, and all of the flower imagery is artful and elegant. The charm of this song occurs at the right time on the album, and the metaphors make you feel safe. The dynamic quality, ebb and flow, and cascading chromatic melodic waves are magisterial. I secretly wish this track could be a painting I get to hang on the wall of my music studio.

We return to the rock-driven swagger of the Black Angels in “A Walk On The Outside”. I’ve never heard of an ice sickle organ, but if you listen closely you’ll be able to hear its dissonant hum swirling around the ensemble.

An eighth-note snare breaks open the door to the gaze of “Vermillion Eyes”. Some of the best lyrics are embedded in this musical chant, “My antenna radiates / spreading love just to spite your hate”. Drummer Stephanie Bailey finds each peak and valley and showcases a percussive session that takes the song to dominant and dynamic swells. The term “vermillion eyes” is a culturally popular reference to not only a movie about sex, gore, and death juxtaposed in 1991 by Nathan Schiff, but also a common feature of the eyes of fruit flies which have been known to spur delightful wonder in the scientific community. Though I’m not certain of any specific correlation this has towards the song, it’s evident that the diction of the speaker is so poignant it can make any listener explore the many inferences of lyrical mapping. 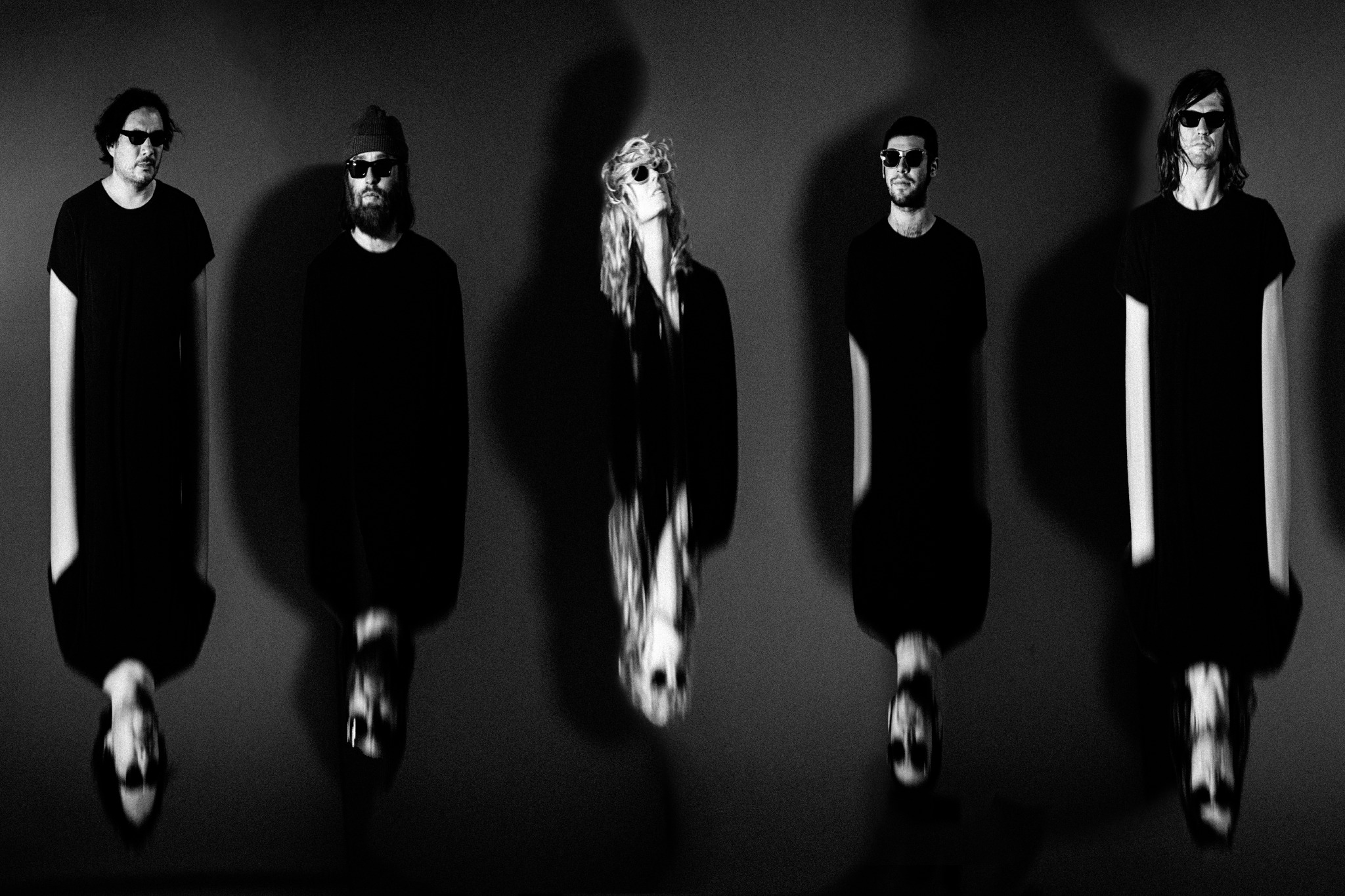 Pictures and imagery are boundless and plenty in “Icon”. Many of the intrapersonal feelings folks experience in solitude are illuminated and targeted throughout the track. Repetitive murmurs and sounds pan from left to right. “No one comes near you when you’re alone” sounds through my mind over and over again while the scream of the electric guitar wails in the spaces in between.

It is an understatement to say that their newest release Wilderness of Mirrors is anything short of a diverse psych-rock masterpiece.

“Suffocation” is a pleading and warning for change. Alex speaks it best when he says it’s a “bad dimension”. And the stamp the Black Angels leave on the psych-rock genre after listening feels much larger than a few clever numbers of creative rock dissonance. I truly believe the Black Angels have a message and uniqueness that approaches the relevance of more renowned artists like Radiohead and Arcade Fire. It is an understatement to say that their newest release Wilderness of Mirrors is anything short of a diverse psych-rock masterpiece that can stand on its own in any time period, much like their final sign-off motif quoting Bach, one of the greatest musical composers of all time. Bravo, Black Angels, and thank you for sharing this one with the world! I strongly suggest readers grab a copy of Wilderness of Mirrors in all formats available. It’s more enjoyable than you could imagine.

Jacob Acosta is a writer, producer, and international recording artist who lives in Tucson, AZ. He has been a music professional in film, advertising, recording, and performance for over 16 years. He has 16 studio albums and numerous accolades in the music industry.

Connect with him at jacobacostamusic@gmail.com.

1 thought on “The Black Angels: Wilderness of Mirrors–Album Review”