Interview: Dylan Sizemore of Frankie and the Witch Fingers

Interview: Dylan Sizemore of Frankie and the Witch Fingers

How have you been doing with the lockdown?  Have you been rehearsing?  Recording?  Taking a hiatus?

This past year has been challenging. In some cases it has kind of felt like a hiatus compared to our normal workflow. Before the chaos came we were writing, recording, and touring pretty much constantly and then the lockdown started and we were stopped dead in our tracks. Shaun and Josh had to leave L.A. for a while and everyone was pretty locked down. The bright side is, we recently took the time off to work on setting up a proper studio in our rehearsal space. Now we can record all of our rehearsals and hour long jams. We’ve stumbled onto a new creative process. We have all of this well recorded material to comb through and jump off of for writing the next record. It’s been nice to mix things up.

He started playing all of these awesome guitar parts without knowing anything about the song. It was the first time in my life that I had ever seen anyone do that.

I understand the two of you met as freshmen in college in Indiana.  Did you guys bond immediately or did it take a while?

Yea, Bloomington is our old stomping ground. I was actually just living there, not going to school. My intention was to meet people to play music with. Josh was going to IU and playing in a few bands including Triptides. We definitely hit it off immediately. I literally just showed up at his house one day unannounced and asked him to hangout. I remember going into his basement and playing through a whole set of new songs I had written. He started playing all of these awesome guitar parts without knowing anything about the song. It was the first time in my life that I had ever seen anyone do that. Just immediately composing these perfect accompanying riffs that matched the songs so well. It’s still miraculous to watch him do that shit. 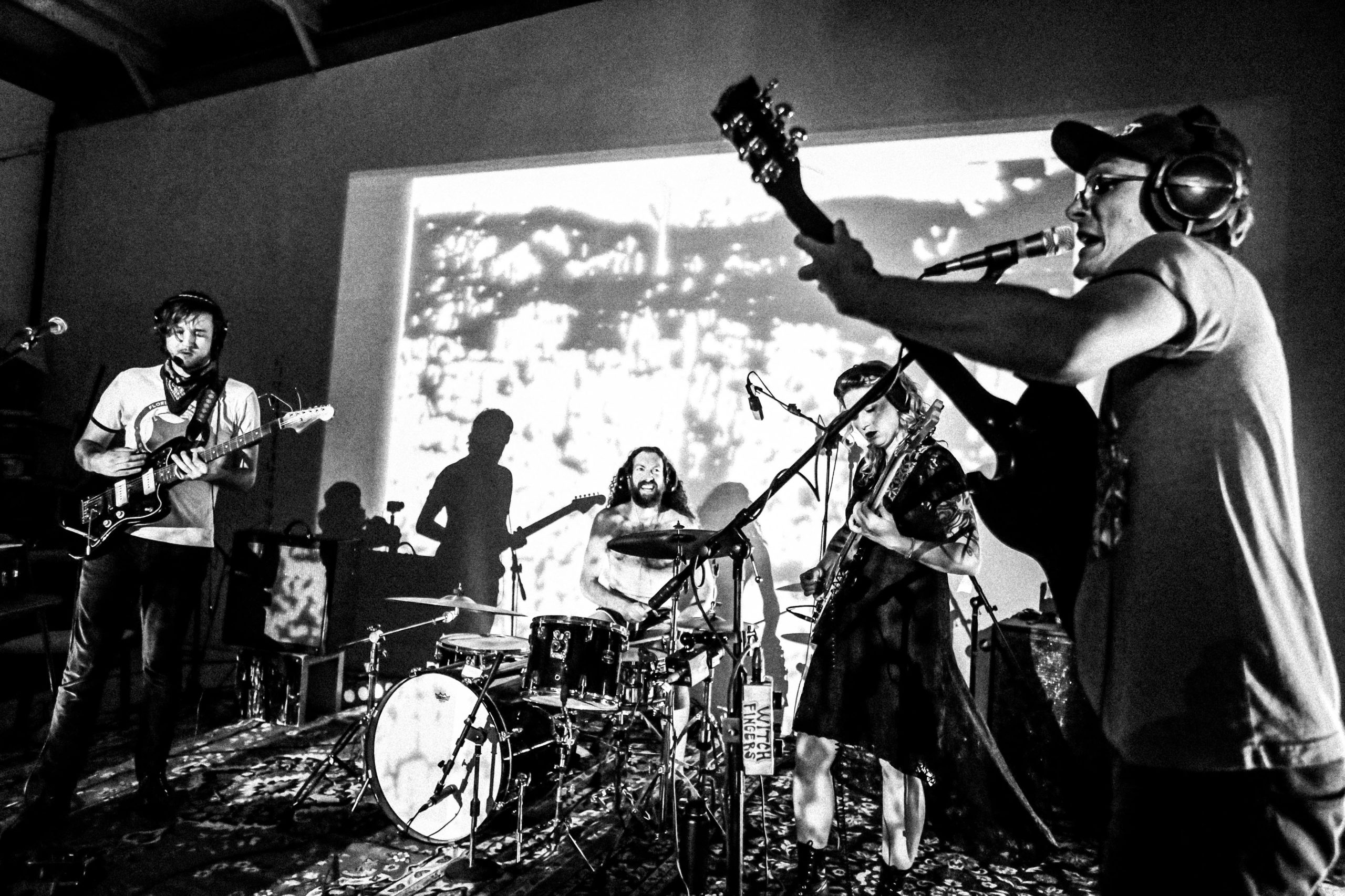 Who are your biggest influences?

When the band started I had just gotten turned on to stuff like the Nuggets comp, King Khan and the BBQ Show, Natural Child and The Stooges. When I met our old drummer Glenn, he had this vast knowledge of 60’s psychedelic music already and turned me on to some really good stuff like West Coast Pop Art, The Golden Dawn, Blue Cheer, Hawkwind, and Can. That kind of stuff was definitely a major influence and target for our sound over the years. Over time we’ve changed our songwriting process and because of that it feels like the musical style choices we make are more informed by each other’s playing. For me, songwriting at the moment comes from all of us playing together. Whatever seems to come out of that naturally will then remind me of something I like, and then I’ll lean into that style naturally.

Now that we have Shaun and Nikki in the band, a lot of the stuff we’ve been playing instinctively has been way more in the pocket and kind of segmented into rhythmic patterns. Personally, that has led me to start listening to more stuff like Funk and Afrobeat for inspiration. Everything comes in waves though. That’s just my take on things now. Our sound definitely gets pushed in a lot of different directions, it’s part of what makes writing so exciting.

I think psychedelic people are the initiators of the changes we need to see in the world and anyone who can make music that reflects that honestly is psychedelic as fuck.

That’s an interesting question. The meaning has definitely changed for me over the years. Everyone would probably say something different. In the context of our band, I’ve often written lyrics, made musical and conceptual choices based on my or my friends’ experiences. When the band started and I was first getting into tripping, it used to be more about the tones, effects, and attitude of the music. All of that stuff definitely makes for some killer psychedelic music, but I do think psychedelic music is a lot more than that. I think it can be music that speaks to the true human experience beyond our culture and idealisms. It can be music that can get to the heart of the experience we’re all having on or off of chemicals, and convey it universally in a truthful way. I think psychedelic people are the initiators of the changes we need to see in the world and anyone who can make music that reflects that honestly is psychedelic as fuck. It doesn’t always have to be so serious. It’s also great to listen to music designed to take you to these places and see for yourself. Psychedelic music for me is mostly about the intention I suppose. It’s kind of psychedelic even trying to pin down what it is. It’s infinite, it’s a spectrum, it’s vibrations, it’s primal, it’s vessels speaking in tongues for the mother souls of the cosmos to impart their wisdom.

How did you come up with the band name?  I know that Frankie is, or was, Dylan’s cat.  What about the Witch Fingers part?

Frankie was and is my mystic realm traveling brother. He is now living his best life in Ohio with our friend Ginny. Ginny is a true beam of love and kindness, she’s been taking care of Frankie ever since I moved out to L.A. She sends me videos of him frolicking in the sun across giant fields. Witch Fingers comes from a psychedelic experience I had but mostly it’s just an aesthetic choice. I think it’s cool that our band name is based on this specific moment in my life. It’s nice that it can serve as a reminder of the journey we’ve made to get to where we are today. Frankie’s been with us the whole time too, what a legend. 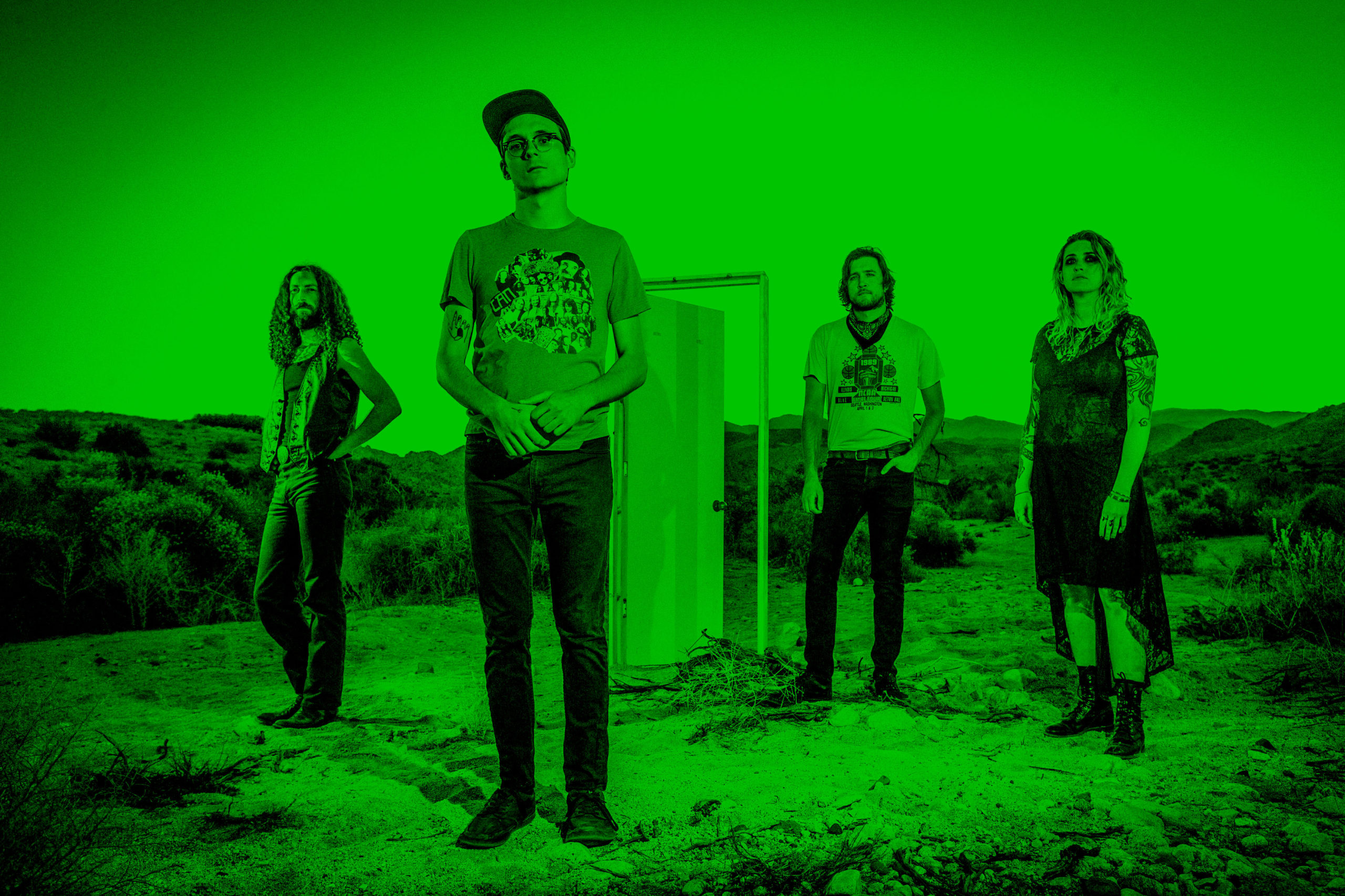 I noticed that you guys played Levitation in 2019.  What was your experience there like?

We were so excited when we found out we were playing, it’s definitely a benchmark show for us. The best part of Levitation is getting to see all of our far away friends. It feels a little bit like a summer camp, where we go visit our friends in Austin and also get to see the friends we make when we’re touring. I got to see Beak play that year; that was really cool. They’re such a good group, and they’re also hilarious, you can’t beat dry British humor for stage banter. I never went to the festival when it was at the ranch and I’ve heard that was a particularly special era of the fest, but they’ve overcome some gnarly challenges and have managed to still have a really killer festival, mad props to the Levitation folks.

The best part of Levitation is getting to see all of our far away friends. It feels a little bit like a summer camp,

You recently added bassist Nikki Pickle from Death Valley Girls to your lineup.  How does it change the dynamic having a member of the opposite sex in your band?  Or does it?

Having Nikki join us was definitely a no-brainer. She’s been touring with us for many years and she’s been an integral part of the band behind the scenes for a long time. When the stars aligned and she joined we were all really excited. Having a female join the group is probably more annoying for her than it would be for us. I haven’t noticed a dynamic change, but we’re also pretty in touch with our feminine side. I think the biggest difference is adding a new member to the group. The way we operate is we try to play to each other’s strengths and so when Nikki joined us so did her playing style and her work ethic and it’s been a balanced addition having her accompany us. I guess the most notable thing I’ve noticed when it comes to female musicians is the kind of shit they have to put up with on tour. People touching them too much or sound engineers talking down to them because they assume they don’t know what they are doing. That would certainly change the dynamic of things, we’re definitely going to call that shit out if it happens.

I saw that you have a show set up in Madrid for 2022.  That’s probably a safe bet.  When do you think you’ll start playing shows again?

Yea, we hope so. It’s been crazy pushing these shows back so far. I think it’s been quite the headache for ticket buyers and promoters alike. We’re super excited to be in Europe again though, it’s definitely one of the dreamiest places to tour. We’ve got some shows coming up pretty soon, and I can’t express how thankful I am that we’ve finally gotten to this point. I’ve been going a little insane not touring. We’re playing Psycho Las Vegas in August and a really cool festival in my home state of Kentucky called Expansion. We’ll be announcing some more tour dates really soon, and we’re fucking elated to be back in action.

Thank you for taking the time to talk to me.  I really appreciate it.

It was an absolute pleasure. Thanks Jason.